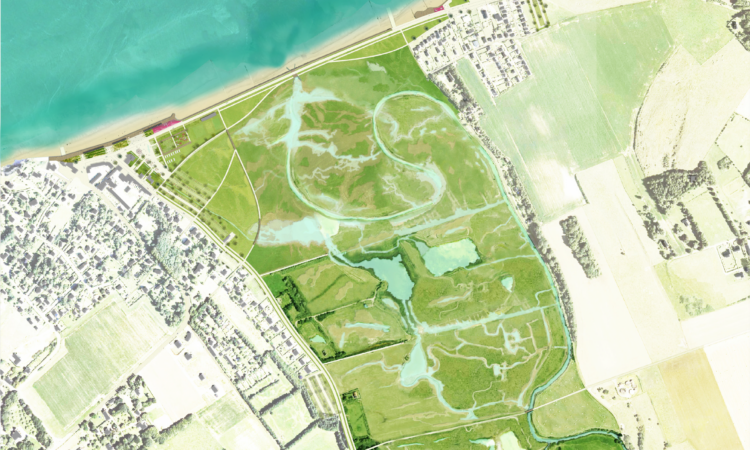 The territorial project for the lower Saâne valley now has a generic name, Basse Saâne 2050, and the three main components of the spatial recomposition project have entered an active phase of work or preparatory actions.

That’s it, the diggers have arrived.

They were seen at work in Quiberville in the first days of September, on the site where the future “new tourist facility” will be built, which will take over from the current campsite in the summer of 2023. Located in a flood zone and on the route of the future Saâne meander, the current municipal campsite will then be dismantled after having, for several decades, enchanted the holidays or retirement of thousands of summer visitors, some of whom have become regulars.

The shovels have arrived… So the work has begun, the site has been launched? Not exactly. Before that happens, a few administrative formalities are required: a building permit to be validated, in particular. The machines that came for a little tour did not dig the foundations of the new facility, they “only” accompanied the work of the experts of the National Institute for Preventive Archaeological Research (INRAP) in charge of the compulsory diagnosis of the site before the construction. With its smooth three-metre bucket, the excavator dug trenches according to a plan drawn up by the archaeologists: if nothing was found in these trenches, everything was filled in and the excavator left. If, on the other hand, these test pits uncover promising remains, then more extensive excavations will have to be carried out.

Of course, it would be great to discover a princely tomb from the Early Bronze Age (1800-1600 BC) at Quiberville, as was the case last year at Giberville near Caen. But this would delay the planning of all future work by several months or years.

Although the archaeologists have not yet officially submitted their report, they have nevertheless given an oral account of their booty. And it is a meagre one: three remains of protohistoric ovens, a few medieval traces, not enough to order a large-scale excavation. However, the traces of an oven testify to an ancient occupation of the territory, and logically we should have found other remains of this occupation. According to the INRAP experts, these remains must have been washed away over the centuries by the runoff of water on this sloping terrain.

Whatever the case, this is a green light for the next occupation of the site: holidaymakers who will come to enjoy the view of the sea and the modern tourist facilities that the municipality intends to provide with its new equipment.

A wastewater treatment plant in Longueil

It is also necessary to be able to offer these future holidaymakers bathing waters that they will enjoy splashing around in. To do this, it is necessary to guarantee that the discharges from the houses in the Saâne catchment area are correctly treated before the river carries them to the sea. However, some communes still do not have a collective sewage network: the waste is treated by individual septic tanks, with unequal results. With the help of European Interreg PACCo funding, a wastewater treatment plant will be built in the commune of Longueil. The electrical transformer that will supply the site and then the plant is already installed. The actual work is about to begin. On the scale of the lower Saâne valley, this is no small project: 24,500 linear metres of gravity pipes will be created, 16 pumping stations, 760 new connections will be installed and as many existing but defective ones will be rehabilitated.

For its operation, the station will produce part of its own electricity: photovoltaic panels will provide this. To process the organic waste from the site, the project managers have called on recognised specialists: a henhouse will be installed on the site, as well as two connected beehives, three insect hotels, five to ten birdhouses, three hedgehog shelters, two squirrel shelters, two bat shelters and four toad and frog shelters. A visitor platform will allow educational tours of the station and of this mini Noah’s Ark stranded just a stone’s throw from the sea.

When Soléa is up and running, the lower Saâne valley will benefit from efficient sanitation, which will ensure healthy aquatic environments, a better quality of life and safe bathing water.

Biodiversity is a concern everywhere in the actions carried out within the framework of the territorial project for the lower Saâne valley. Terrestrial biodiversity, but also aquatic biodiversity. This is why, in mid-September, the inhabitants of Sainte-Marguerite-sur-Mer were able to see, in the middle of the river, strange fishermen equipped with waders (waterproof overalls extending from the foot to the thigh to the chest)

and, by way of a fishing rod, a sort of pump which took water and then threw it back after passing through a filter. As far as we know, it was not fish that the fishermen were trying to catch, but only… their DNA. This environmental DNA collection aims to inventory all the species present in the waters of the Saâne. At the same time, other technicians are carrying out inventories of other groups: birds, insects, flora, etc. This fauna-flora study, carried out over four seasons, will make it possible to complete the file for the environmental authorisation prior to the third major component of the Saâne 2050 project: the meandering of the river and its connection to the sea via a frame bridge that will replace the current culvert. At the end of the territorial project, the lower Saâne valley will not have returned to the estuary it was a few centuries ago, but it will be ready to face the decades to come, and their context of climate change.