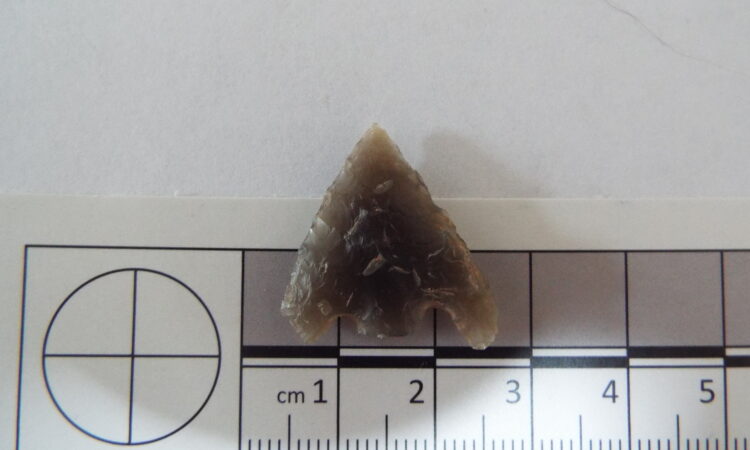 Archaeological investigations as part of the Lower Otter Restoration Project have identified interesting finds relating to early prehistoric occupation of the river estuary in East Devon.

The investigation carried out by SW Archaeology included geophysical survey, surface artefact survey and trial trenching. The surface artefact survey focused on four ploughed fields either side of the flood plain. With the help of local volunteers, the team found scatters of humanly struck flint, some of which had been shaped into tools such as arrowheads and hide scrapers.

There is evidence of human activity in southern Devon as far back as 36,000 years ago, highlighted by the stone tools found at Kents Cavern, Torquay, deposited during one of the warmer spells during the Ice Age. However, the Lower Otter finds relate to periods after the end of the last Ice Age, when the climate was beginning to warm and environments were stabilising into the landscape we live in today.

The artefacts recovered are predominantly made from flint, a natural silica rock resource common in Southern England, but not found naturally occurring in the Lower Otter. The likely source of this material is further east at Beer near Lyme Regis. The archaeologists also recovered a few examples made from more locally sourced chert (a hard crystalline quartz).

The most interesting group of flints found fit into a tool group known as ‘Microliths’ and were made about 11,000 years ago. The tiny blades were used to form composite tools, predominantly projectiles for hunting. The Mesolithic people using them were hunter-gatherers using local woodlands. They would probably draw resources in small extended family groups, from a large area such as a river valley. The fact that flint is not found naturally at the Lower Otter suggests that there may have been a trade network operating between these groups. This could possibly be the first indication of task specific trades or professions, such as flint mining.  Certainly, everyone within these societies would have had some degree of proficiency in knapping the flints into tools, probably learnt from a very early age.

The Mesolithic period is a significant chapter in human history due to the large time expanse (c.4,700 years), and also for the climatic and environmental changes that occurred, many of which are still impacting modern societies.

The landscape at the very beginning of the period, was one that had recently developed from an open post-glacial landscape and rapidly colonised by deciduous vegetation such as birch and hazel. Southern Britain was still connected to mainland Europe by a land bridge, predominantly an area known as Doggerland now submerged under the North Sea between Holland and south-east Britain. Rapid sea level rise of up to 9metres and significant storms, led to the flooding of this land bridge in c. 8500 years ago, forcing mass immigration from the lowlands onto the higher ground.

The disconnect from Europe commenced a distinctly individual culture forming in Britain, which was enhanced by the migration of peoples and new ideas at regular intervals from Europe. One of the most important cultural changes was the introduction of farming in the late Mesolithic period, forming a new period known at the Neolithic.

The microlith makers of the Lower Otter appear to have been camped on an elevated point on the east side of the Otter overlooking the river flood plain. We do not know the location of the river mouth at that time, but it is likely to have been roughly in the same location as today. From here they would have a good view of the flood plain, being able to track animals to hunt and, also spot other humans. This dry elevated position probably also gave them some security. The camp was likely temporary, but the spot may have been visited on several occasions, perhaps even by different generations of the same group. Makeshift structures may have been built to sleep under and to hang carcasses for processing and fire pits dug for keeping warm and cooking on. It is unlikely this camp was used in the winter; during this period the group probably withdrew to a larger more permanent settlement in a more sheltered location, perhaps joined by other groups.

Small scatters of struck flint and tools, including arrowheads, were found in all the fields investigated. Some of these flints may date to the subsequent Neolithic and Bronze Age periods; and likely represent individuals repairing hunting kits as they moved through the landscape. Certainly, in the Neolithic period and into the Bronze Age period, despite having farming technologies, hunting and gathering probably represented a significant part of the yearly food resource for these communities.

However, farming was changing the landscape with much of the woodland felled to make way for grazing and cultivation. The river flood plains such as the Otter were harder to farm so still offered a huge resource of food such as wild game and fish, along with material such as reeds for thatching buildings. The clearance of the woodland represents the beginning of human impact on the river, allowing considerable amounts of soils to wash into the valley and silt it up.

The finds from the Lower Otter Restoration Project archaeological investigations will be sent to the Royal Albert Museum in Exeter. We will also display some of them locally at Budleigh Salterton and at Clinton Devon Estates.

The Lower Otter Restoration Project is being carried out in partnership with the Environment Agency, landowners Clinton Devon Estates and the East Devon Pebblebed Heaths Trust. More information is available at: www.lowerotterrestorationproject.co.uk or contact dcisenquiries@environment-agency.gov.uk