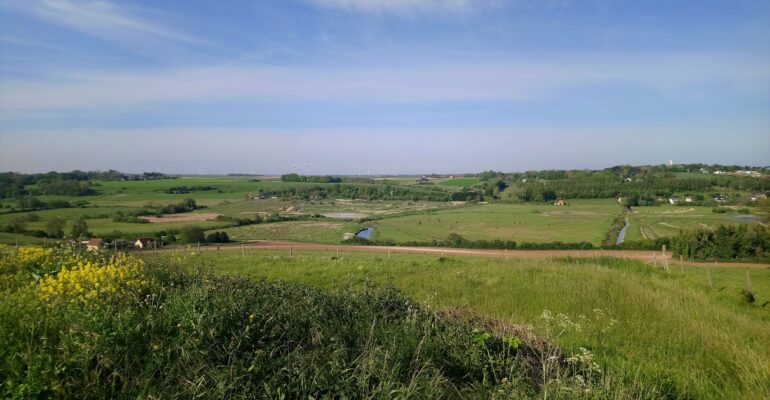 The Saâne is a coastal river in Seine-Maritime, measuring 34 km in length and situated to the west of Dieppe. The Vienne serves as its primary tributary. As with many of the coastal rivers in Normandy, and all those of Seine-Maritime (Yères, Dun, Durdent, Scie…), its outlet to the sea consists of a drainage pipe and a valve. The Saâne’s old estuary is closed off by a dyke-road that runs along the coastline, connecting Dieppe with the Pays de Caux. Beginning in the 16th Century, the Saâne estuary has undergone a number of dramatic modifications. Prior to this period, the Saâne flowed into a brackish marsh, separated from the sea by a pebble beach.

The first works on record were undertaken for military purposes between 1560 and 1768, with the aim of frustrating English attempts at invasion. During the 18th Century, a network of dykes was built in an effort to promote agriculture in the lower valley. In 1864, the Saâne Estuary’s first wooden drainage pipe was installed. Its purpose was to clean up the area by facilitating water drainage and limiting the impact of sea water on the surrounding land. In addition, the valley began to welcome its first recreational bathers as early as 1856. Between 1963 and 1973, the Quiberville campsite was built. Situated alongside the dyke-road and the Saâne, it has allowed for the preservation and development of local activities such as fishing, restaurant services and water sports.

This area, built around a damp[?] valley framed by chalk cliffs, is subject to several risks: coastal erosion, river flooding and coastal flooding. The past evolution of agricultural practices, such as the conversion of pastureland to cropland, has exacerbated the effects of flooding by increasing erosion and runoff of rainwater laden with mud and silt. These changes have not come without consequences for water quality and soil fertility. Furthermore, the development of local tourism and the increasing attraction of the Cauchois coastline have also brought about changes to land use, with increasing artificialisation of land and waterproofing of surfaces. All of these factors worsen the effects of flooding.

The recent history of the lower valley is marked by several such events, some of which live long in the memory: the river floods of January 1995, December 1999 (the most extensive ever recorded) and May 2000, as well as a coastal flood in 1977. The area is vulnerable, and the effects of climate change serve only to accentuate this situation, as demonstrated by Storm Eleanor in January 2018.

These elements have together led the communes of the Saâne Valley to reflect on solutions that could be implemented in order to reduce the area’s vulnerability to flooding. Simultaneously, changes in regulations have made a review of plans for the Saâne’s development necessary. The 2006 law on water and aquatic environments, for instance, raises the question of ecological continuity (involving obligations to ensure the free movement of fish and to re-establish hydro-sedimentary equilibrium).

It would seem necessary, therefore, to create a forward-looking vision for the development of the lower Saâne Valley that would be embraced by stakeholders and citizens alike, and would provide a robust response to the challenges of minimising the risk of river and coastal flooding, maintaining the area’s socio-economic attractiveness, and improving environmental and water quality in the lower valley. All of this requires adaptation to climate change.