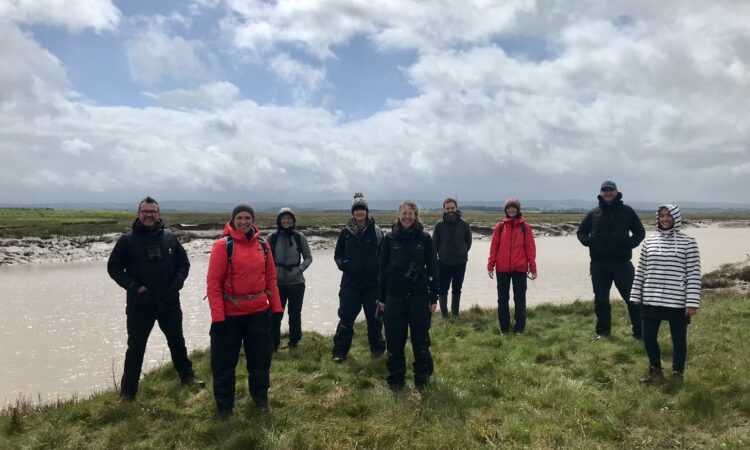 There is no doubt that the project to reconnect the River Otter with its flood pain is an exciting opportunity to rethink how we manage not only this piece of land, but also other coastal sites that face similar challenges. The work that will enable us to manage the lower Otter river more sustainably in the face of climate change is twinned with a partner project in France, in the Saâne Valley. Together, these two managed realignment schemes form the PACCo project. As well as the obvious physical changes on the sites, behind the scenes there is also a buzz of activity as we work with specialists to methodically collect data to help us understand the impacts of the schemes. This can then be shared with other estuarine areas to help them navigate their way through future schemes as they look to safeguard their own sites from the impacts of climate change (including sea level rise, increased flooding and extreme weather events).

Managed realignment schemes are not a new concept. There are some wonderful examples across the UK at a range of scales, from tens to hundreds of hectares. Just as we hope to be able to share our learning with others in the future, we are also keen to gain insight from those projects and sites that have already let the tide in. So, when we were invited by the Wildfowl and Wetland Trust (WWT) to visit their Steart site in Somerset, we jumped at the opportunity to visit and meet their team. With the visit booked for late May we expected a day of sunhats and sunglasses. The reality was instead typically British, with a yellow weather warning for wind calling for woolly hats and waterproofs. Luckily, the team from WWT weren’t phased and kindly still showed us around.

Steart Marshes is the first of what the WWT call their ‘working wetlands’. The threat of flooding was very real for people living on the Steart Peninsula. So together, the WWT and the Environment Agency came up with a solution based on the views of the local community and the suitability of the landscape for wetland wildlife. The reserve now provides a flood defence for local homes and businesses, produces high quality livestock and is home to a thriving nature reserve.

Rising sea levels are predicted to flood thousands of hectares of saltmarsh and mudflats over the next 50 years. These habitats are not only important feeding places for many birds and fish, but are a natural buffer against storms and high tides. At many places along the coast there is no choice but to build higher defences to protect communities. But Steart has demonstrated that in some places it is possible to realign the coastline, allowing new saltmarsh to form, providing a cheaper and more sustainable way to protect against flooding into the future and creating much needed space for wildlife.

Steart sits between the mouth of the River Parrett and the Bristol Channel on the Somerset coast and has some of the biggest tidal forces in the world. The tidal area alone is almost 3km long and 1km wide. The adjoining brackish areas and freshwater grazing marsh make up the remainder of the reserve. Though the site is now managed by WWT as a nature reserve, during the realignment project they worked with the Environment Agency to plan and deliver the works, much like we are on the River Otter. The project started in 2009, with work on the ground commencing in 2011. The main earth works happened during 2012/13, with the final breach of the sea wall taking place in Sept 2014, allowing the tide to cover 300 hectares of low-lying land for the first time in centuries.

Tim, who was the WWT project lead, described how the first 6 months following the breach were incredibly dynamic, as creeks were cut and material deposited by the tide. He emphasised how important it had been to remove any potential obstructions, such as hedges, to allow this process to take place unhindered, while the designed creek network helped the initial movement of water around the site. The new saltmarsh formed more quickly than was expected, with colonising saltmarsh plants found in the first year following the breach as the tides deposited silt, seeds and plant material.

Steart Marshes was once arable farmland and it continues to be farmed with livestock by local graziers who are able to market saltmarsh lamb and beef for a premium because its flavour is valued by food lovers. Problems with salinity from a historic breach, and the expectation of it happening again, meant that the farmers were open to an alternative farming model. The WWT team have built a strong relationship with their graziers which is clearly a win-win for both wildlife, the farmers and the local community. The cattle and sheep extensively graze the area, including some impressive long horn cattle.

Though the reserve is open to the public to visit, having a car park, toilets, comfortable bird hides and a good network of trails, Site Manager Alys explained to us that unlike most WWT reserves, which have a strong focus on attracting visitors, this is not the case at Steart. Though visitors are very much welcome to enjoy the reserve, WWT have consciously decided not to develop a full visitor centre. Instead, the emphasis is on a low level of development to enable independent visitors to explore Steart; it is on supporting local people to realise the benefits from improved access to their health and wellbeing, but without the site becoming a ‘destination’. A tricky balance that our team could certainly relate to. This clear purpose and plan for the reserve has allowed them to concentrate on managing the habitats and to continue their monitoring and research; it has kept the focus on use as a demonstration site to raise awareness of the value of wetlands.

That said, the reserve does see in the region of 70,000 visits each year, and we were impressed by the quality of the facilities provided for a nature reserve that is free for people to visit. We were surprised to learn that some of the financial support for ongoing visitor management comes from an unlikely source, Hinkly Point, which is located nearby. Though not every nature reserve has a nuclear power plant down the road, it highlights the potential of thinking creatively about working with industry and commercial operations.

As well as the development of the habitats, their ability to support wildlife, and role to buffer the impact of sea level rise, an important piece of ongoing research at Steart measures its ability to sequester carbon. Though plants like trees are widely recognised as important for capturing carbon, the often-overlooked saltmarsh plants are proving to hold their own when the numbers are crunched. When saltmarsh plants die, rather than decomposing and releasing their carbon into the atmosphere, they become buried in the mud. Though this ‘blue carbon’ is perhaps less charismatic than a stand of trees, the numbers don’t lie. This high-density carbon accumulates in oceans and coastal ecosystems over time. Current science tells us that globally the rate of carbon sequestration on coastal wetlands is greater than in all forests combined, despite forests covering much larger areas. That is pretty mind blowing. The carbon sequestration research at Steart is being carried out by Dr Hannah Mossman and Rachel Dunk from Manchester Metropolitan University. They estimate around 30,000 tonnes of carbon has been buried on this site since its restoration, which they think is likely an underestimate as it becomes more vegetated. They have found that the sediment accreting now is more carbon rich than the previous agricultural soil, which had become carbon depleted. The team from Manchester University are also working with us to study the impact of the restoration scheme on carbon sequestration in the lower Otter Estuary project area. You can read more about this in our Carbon Sequestration blog here. Though the Otter is smaller it will be fascinating to see the comparison between the data sets.

And the wildlife highlight of the visit? Well, that has to go to fluffy little avocet chicks which were busily sweeping their way through the shallow water while we sheltered from the unseasonably strong wind behind the viewing screen. Just one of the many species which are now thriving on the site.