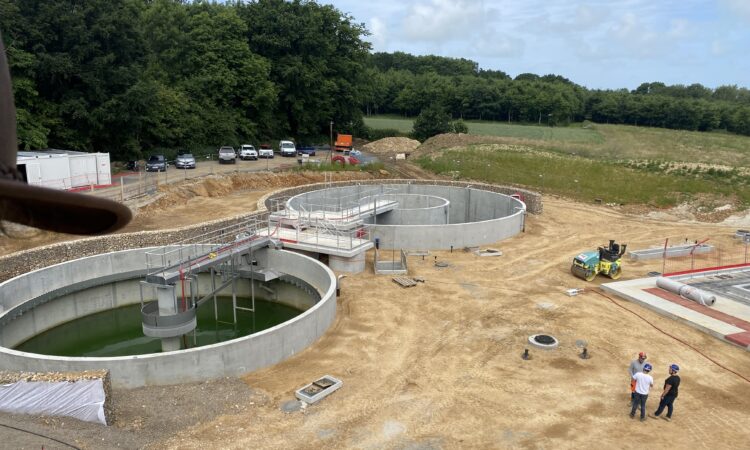 The last time the Estate organised a formal envoy to France was in the 15th century. John Clinton (5th Baron Clinton) was the garrison commander of Pontoise at the time of the Hundred Year War. In 1441 he was captured by the French during a siege of the town and castle and held in captivity for six years. Forward almost seven centuries. Our current visit was not about negotiating the release of an Estate prisoner of war; rather it concerned knowledge exchange with work colleagues as part of the cross-border initiative Promoting Adaptation to Changing Coasts (PACCo). No need then for the saddle bags packed with the 5,000 marks ransom required to secure the eventual release of John Clinton. Shoulder bags with notebook and pen would suffice. The only jeopardy we were likely to encounter on the trip was whether we would be singled out for being from the UK and made to wait in the slow queue at passport control whilst those from the European Union breezed past us in the fast stream lane.

Since 2020 the Estate has been a key partner in PACCo. Funded by the Interreg France Channel England Programme, the aims of the project are to highlight the risks of climate change to coastal communities and to demonstrate that early adaptation is not only possible but desirable. A key objective is to produce a “how to” guide that other coastal communities can follow that assists them to decide whether adaptation is right for them, and if so provides guidance on how to proceed. The project focuses on two pilot sites: the lower Otter valley (the site of LORP) and the Saâne Valley in the small town of Quiberville in Normandy, France. Since PACCo began we had been unable to undertake the partner exchange commitments required due to the covid pandemic so were thrilled to finally meet our French partner organisations face-to-face. All those involved with the trip have been instrumental in leading on aspects of PACCo delivery and included myself, Carla, Kate, Clare, Kendal, Kim and John (Varley). Sadly, Chris who has overseen all the finances of the scheme was unable to attend on this occasion.

A recent study published by the journal ‘Ocean and Coastal Management’ illustrates the seriousness of sea level rise. By 2050 (assuming a conservative sea level rise caused by temperature increases of 2C by 2100), up to 160,000 properties in England will be at risk of needing relocation. That’s in addition to between 30,000 and 35,000 properties that have already been identified as at risk.

La Côte d’Albâtre, known also as the ‘Alabaster Coast’, of Normandy stretches for 80 miles between Étretat and Dieppe and shares the same soft chalk geology as the coast around Dover with its steep white cliffs. This strip of coastline has been given its nickname from the milky colour of the waters along the coast where the rock is being dissolved by the sea, and this same colouration was evident as our ferry passed the breakwater at Newhaven at 4pm.

There are many coastal similarities between the southern coast of England and the northern coast of France. Both were once connected, with animals and people freely roaming backwards and forwards across a continuous bridge of land. This was until around 400,000 years ago when there was a huge flood that carved what was the start of the English Channel between England and France. Sea level rise has widened and deepened the gap. Since that time coastal erosion has been slowly eating away at our coasts with the channel (or ‘la Manche’) growing ever wider. We have all seen the cliff falls associated with Sidmouth and Budleigh; the corresponding French coast at Normandy is eroding at a rate of 60cm a year. Indeed, on our trip we were shown the Phare d’Ailly, a quadrangular lighthouse built on the tip of Ailly adjacent to the Saâne valley. This was the second lighthouse to be built at this location, the first having to be relocated due to erosion despite being built initially 156 metres from the sea. On the beach at Quiberville, at the mouth of the Saâne, we also saw a gigantic monolith of rock the size of a large house lying on the beach, this having fallen from the cliffs above.

Our host for the trip was Camille Simon, PACCo Project Manager for the Conservatoire du littoral in Normandy, the lead partner organisation for our partner site. We were very grateful for the hospitality shown by her and the other team members and the two translators that ensured the conversation flowed effortlessly.
Throughout our trip we were repeatedly struck by the many similarities between the Otter and the Saâne. Both have a similar length (about 44km) and suffer from poor water quality related to diffuse agricultural pollution and the release of human sewage into the rivers.

New campsite at Quiberville under development

A trivia quiz question. In which sport were France awarded a silver medal after a final played against the English in the 1900 Olympic games held in Paris, after which the sport was never played at the Olympics again? The answer is of course……cricket. I did some research and searched for the number of cricket grounds in France. This is perhaps the only time in my life that Wikipedia has delivered a blank return. I make this connection of course as one the legacies of LORP is providing a future for Budleigh Salterton Cricket Club that is free from flooding, and a ground and clubhouse that will be the envy of most clubs in the south west. The upgraded facilities will enable the club to grow the game, including disability and women’s cricket. The French largely regard our quirky national sport with disinterest at best and the Saâne Valley does not have a cricket ground a risk from flooding. It does however, have a campsite equally at risk. Quiberville itself is a small community of 150 souls in winter growing to 500 in summer. The camping ground is a centre for local tourism powering 40% of the local economy. Under PACCo this will be relocated away from the floodplain providing a more sustainable future for the community who depends upon it. After a ½ hour drive from Dieppe to Quiberville, our first stop of the day was the site of the future camping area where ground works are already well developed.

Our second stop of the day was Soléa, a new wastewater treatment plant funded under PACCo. Here we met with Amélie Boutillier (Head of Technical Office & Town Planning, Communauté de communes Terroir de Caux) . Soléa owes its nickname to the flatfish sole. When completed the plant will have a similar shape to this fish when seen from the air, with scales of photovoltaic solar panels generating 90% of its energy requirements. At present, the majority of the 4,000+ homes associated with the lower Saâne valley do not have mains sewage. Once Soléa is completed most will be connected to the plant with the pollution associated with poorly managed septic tanks removed. The works will also allow the decommissioning of two existing failing sewage works in the adjacent communes of Brachy and Ambrumesnil and address longstanding shortcomings in waste water treatment. The old municipal dump within the Otter’s floodplain is our equivalent environmental liability exposed to erosion. Initially LORP investigated the possibility of removing the tip in its entirety but the costs of doing so were prohibitive. Instead, our scheme will improve the capping of the site and armour its sides so that its contents is secure from future erosion.

The outfall trough with the Saâne river currently flow sea

The final stop of the morning was the mouth of the Saâne where we met Laurent Topain, Director, du Syndicat Mixte des Bassins Versants Saâne Vienne et Scie. Unlike the Otter which naturally flows out to sea at Otterton head, the Saâne only drains through a small culvert running under a road that runs along a shingle bank. This is of insufficient size to drain the valley behind when fluvial flood waters rise. One aspect of the French scheme is to replace the culvert with a road bridge allowing a greater capacity of river and tidal water to pass beneath. Behind the shingle bank and road, new meanders will be created in the river which is currently largely canalised. Once the scheme is completed 40 hectares of rare new tidal habitats will be created to add to the 55 hectares created by LORP. We were able to compare notes with Laurent on the inter-tidal habitat each of our schemes would deliver as well as agricultural issues impacting on water quality. Whereas the growing of maize on steep slopes is one of the worst contributors to poor water quality in East Devon, the growing of linseed in northern France has similar environmental consequences.

We were then treated to a packed lunch in the local hall before our group split for the afternoon. Kendal and Kate disappeared to l’Ecole de Quiberville local primary school where they delivered a learning activity on the impacts of climate change. The remainder of our group was given a tour of the local landscape which included the visit to the aforementioned lighthouse, as well as a church where there were monuments to British soldiers who died during the Dieppe raid (Operation Jubilee) in 1942. Honorary mention was given to the 4th Commando which suffered heavy losses and a Captain Porteous who was awarded a Victoria Cross for his bravery. Further research revealed that Operation Jubilee was a military fiasco resulting in the deaths of 50% of the 6,000+ allied troops who landed and the loss of 106 aircraft. Few of the mission’s objectives were reached. However, lessons were learnt that influenced the later success of the D-Day landings. My favourite fact from the afternoon was that the rotating light in the Phare d’Ailly lighthouse ‘floats’ on a bath of 400 litres of liquid mercury. Although the weight of the light is immense it can easily be turned by a light touch of the fingers, the mercury providing conditions that allow low-friction rotation. An interesting research paper in the journal Environmental Research from 1988 draws attention to acute mercury poisonings associated with lighthouses and incidents of abnormal behaviour in their keepers. The Phare d’Ailly is now automated but the mercury bath remains.

On the way back to the hotel we were shown a poplar plantation at Longueil recently purchased by Conservatoire du littoral to secure the future of environmentally sensitive land adjacent to the Saâne. They are converting this site to a wetland wildlife reserve.

The next day we met early for breakfast, bought some baguettes for lunch and after a five minute drive joined the queue for the return ferry. An uneventful crossing, then back in the minibus, passing the Newhaven Enterprise Zone (closed for business!) before heading westwards towards the joy that is the A31 and the Ringwood Roundabouts at rush hour on a Friday afternoon. Welcome to Blighty! On the 6th and 7th July we will be hosting a return visit from our French partners and we look forward to returning the hospitality. We left inspired by the work they are doing and hope they will be equally impressed by progress made in Otter valley towards delivering LORP.