By 2025, the Saâne will no longer flow into the sea through a narrow pipe (Photos AC/PN)

The lower Saâne valley, between Longueil and Quiberville, will be the focus of investment between now and 2025 in order to combat flooding. Europe has granted essential and expected funding.

“It is the biggest and most ambitious climate change adaptation and spatial reassignment project in northern France, which will be fully implemented by 2025, with three key pillars: risk reduction, maintaining economic appeal and restoring coastal biodiversity”, said Régis Leymarie, Normandy deputy delegate at the Conservatoire du Littoral, on Tuesday 1 September 2020, referring to the transformation due to take place in the lower Saâne valley, between Longueil and Quiberville. “Without European involvement, this project would not have happened”, reiterated Régis Leymarie during a meeting at the Quiberville community hall, and again during a visit to three sites particularly affected by the investment: firstly, the area set to be the future Quiberville campsite on rue de la Saâne, set back from the D127, then the poplar grove in Longueil, and finally the culvert pipe where the Saâne flows into the Channel, near the current Quiberville campsite.

The project has been the subject of research since 2012. Brexit does not jeopardise “the outstanding commitment of the European Union through the France-England Interreg programme, PACCo (Promoting Adaptation to Changing Coasts)”, Régis Leymarie pointed out. Jean-Philippe Lacoste, Normandy delegate at the Conservatoire du Littoral, added: ““The Conservatoire owns 51 hectares in the lower Saâne valley. This gives it legitimacy and allows it to take action. Otherwise, we would come up against obstacles because we’d be lacking legitimacy.”

Jean-François Bloc, Mayor of Quiberville and regional councillor, is delighted with this outcome following a series of floods long before 2012: “We’ve been talking about flooding for 20 years. In the past, our campsite has been inundated with up to 1.6 m of water”. This local camping accommodation is unusual in that it is located slightly below sea level. If you want to go for a paddle from the current campsite, you just need to cross the D75 that runs alongside the beach. This will no longer be the case (see below).

“We have often come together here to find solutions. This time we are talking about practical, operational steps”, the Mayor said proudly.
In order to highlight the wide range of stakeholders in this huge rewilding project, everybody was present at the meeting, including representatives from the State, Region and Department, the Terroir de Caux community of municipalities, the municipalities of Quiberville, Longueil, Saint-Marguerite-sur-Mer, the joint association of the Saâne Vienne Scie catchments, the Seine-Normandy water agency, the public land-management organisation of Normandy and the Conservatoire du Littoral, which plays a coordinating role.

In five years, the Saâne will flow into the sea where the current campsite is located. Today, Director of the joint association of the Saâne Vienne Scie catchments, Laurent Topin, pointed out “We have an artificial stream bed. Everything is man-made.”

Pollution is man-made too. This is why the plan also includes the creation of a brand new waste water treatment plant in the hills above Longueil. The President of the Terroir de Caux, Olivier Bureaux, has confirmed that this facility will replace current plants and will have the capacity to serve “5,000 inhabitant equivalents”. Pumping stations and connecting pipes will be installed or renovated. “Longueil and Saint-Denis-d’Aclon currently have no combined sewer system. The facility in Ouville dates back to 1970 and is showing its age”. The same is true for Gueures and Brachy, among others.
According to Jehan-Éric Winckler, Subprefect of Dieppe, this new waste water treatment plant will mean that “the government will no longer need to issue health protection orders, as they have done in the past.” Polluted water being discharged into the Saâne and subsequently the sea has occasionally forced the government to ban people from bathing. However, despite this administrative progress, he also warned: “The easy things are done. Now we need to roll up our sleeves.”

[tagline underneath photograph] By 2025, the Saâne will no longer flow into the sea through a narrow pipe (see left). (Photos AC/PN)

How much will it cost?

The France-England Interreg programme, PACCo, (European Union) is generating €11m as part of this project for the spatial reassignment of the Saâne. This European subsidy is providing 69% of the funding for a number of different actions, including two major ones: the new campsite in Quiberville amounting to €4.7m and the new waste water treatment plant at Longueil at a cost of €2.8m. For the campsite, the Department will contribute €387,000, the Region €351,000 and the municipality needs to find €1.4m. For the waste water treatment plant, Terroir de Caux will contribute €609,000, Eau Seine Normandie €466,000 and the Department €184,000. 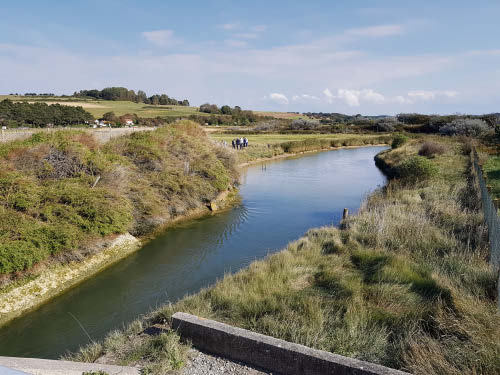