The mouth of the Saâne as it is today: a pipe into the sea by the coastal road and campsite, which is to be relocated further upstream to a site not prone to flooding. Photo: © G. Pain

The Saâne, in the Pays de Caux, and its lower valley are to be reconfigured in light of climate and coastal changes. In the event of flooding, the river and valley will drain faster.

The Saâne, a small 40km coastal river, flows into the Channel between two cliffs of the Alabaster coast in Quiberville (Seine-Maritime). However, the partially channelled mouth of the river flows through a large culvert pipe. “The valley would fill up and then struggle to drain.” Jean-François Bloc, Mayor of Quiberville, recalled the coastal flooding of 1977 and the flooding in 1999 and 2000 in the lower valley:
“The water level in the seafront campsite was 1.6m high. ”

With the Conservatoire du Littoral, which owns and protects 55 of the 360 hectares of the valley and seafront, three coastal municipalities, Quiberville, Sainte-Marguerite-sur-Mer and Longueil, will completely alter the layout and rewild the valley and its river, allowing the sea and migratory fish back in. “We’ve been working on this project for ten years”, said a relieved Jean-François Bloc, who should see it finally come to fruition between 2021 and 2025.

“The first but not the last”

“The challenge is also to adapt the site to climate change through the spatial reassignment of the valley”, according to Régis Leymarie, who is leading the project from the Conservatoire’s side, in the light of coastal erosion and sea levels rising by between 40cm and 1m by 2100. The river will be reconnected to the sea with new meanders, the banks made less steep and the earth embankments levelled off to allow the valley to drain more quickly. These recreated wetland areas will be home to estuary-dwelling plants and wildlife, providing natural habitats for migratory fish and birds, for instance.

The campsite will be relocated further upstream in 2023 outside the flood-prone areas, “with 150 bare pitches and 50 wooden lodges”, the Mayor explained. A bridge, ten metres wide and five metres tall, will be built over the Saâne to replace the culvert pipe. The waste water treatment plant will have the capacity for 5,000 residents and 400 homes, and will treat waste water to provide the river with good quality water suitable for bathing. Farmers will leave their cows to graze in the valley: “There could be sheep…salt marsh lambs”, smiled Jean-François Bloc. A GR walking trail already runs through the area, but more trails will be created.

Jean-Philippe Lacoste from the Normandy Conservatoire du Littoral, which has 70 sites and 13,500 hectares of protected land along the 7,000km of coastline between Tréport and Mont-Saint-Michel, sees this reconfiguration as “a test case. There is no other site on the entire French coastline where this kind of approach is being taken. It is the first. But not the last.”

The works, costing €18m, were subsidised up to a maximum level of 80% by the Region of Normandy, the Department of Seine-Maritime and the water agency. However, above all, the EU has maintained its commitment to invest €8m despite Brexit, through the Interreg France (Channel) England programme, PACCo (Promoting Adaptation to Changing Coasts), in two very similar valleys on either side of the Channel: the Saâne in France and the Otter in Devon. 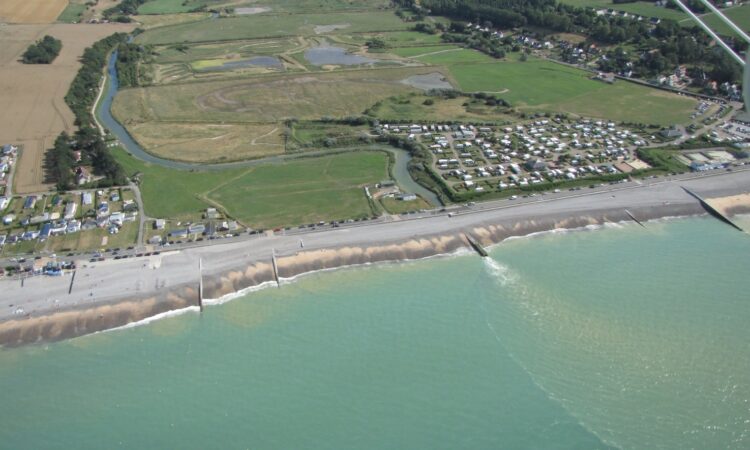