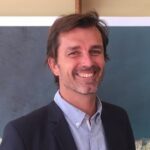 I’ve been at Conservatoire du littoral since late 2007 and I’ve been working on the topic of adapting to climate change since 2010. It began with getting the LiCCo (Living with a Changing Coast – Littoraux et Changements Côtiers) Interreg project up and running. That ran from 2011-14 and was led by the Environment Agency. The site in the Saâne valley is one of five French sites and pairing up with our British counterparts has been very successful. I have been involved for a number of years in getting local projects off the ground in the Saâne valley (Quiberville, Sainte Marguerite and Longueil) in partnership with the project’s financial and engineering stakeholders (Normandy council & the Seine-Normandy Water Board).

The local Saâne valley project is now recognised locally and at a county and regional level. Thanks to PACCo, the area can now implement its plans and become a flagship project for the whole Channel coast.

The Conservatoire du littoral has taken a cross-discipline (engineering, scientific, biodiversity, social sciences, landscape, etc.) approach, which is something I hold dear. I combine it with my geography background, specialised in coastlines. The spirit of this project with our English partners under the PACCo umbrella is the will to keep proving how adapting coastal areas for climate change is possible.