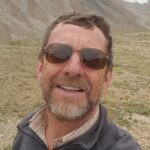 I joined the National Rivers Authority in 1990 having moved to Devon to study for a biology degree as a mature student. My career was previously very varied including working for the family road haulage business, carrying out industrial radiography, and working for a ladies’ hat manufacturer, once a traditional trade in his home town of Luton.

I led a small but slowly expanding Conservation & Recreation Devon team, working right across the NRA’s business until it became part of the Environment Agency in 1996. I was closely involved in wetland management and restoration, including water level management for grazing marshes and led on the development of self-regulating tilting weirs, and also invented a new design for a self-regulating tide gate, allowing controlled tidal inundation behind defences. I worked on invasive species control, eliminating floating pennywort from a wetland SPA and was also part of developing the emerging Biodiversity Action Plans and was the UK lead for river shingle beetles.

My work became ever more closely linked to flood and coastal risk management and this resulted in an internal move into that part of the business, where I became part of the team working on shoreline management plans and the Exe Estuary Strategy. This in turn led to concentrating on delivering habitat restoration projects, particularly around estuaries in Devon, over the last 15 years. I am the Environment Agency’s environmental lead and Senior User for both the Lower Otter Restoration Project and the PACCo project.